“To Find My Soul” 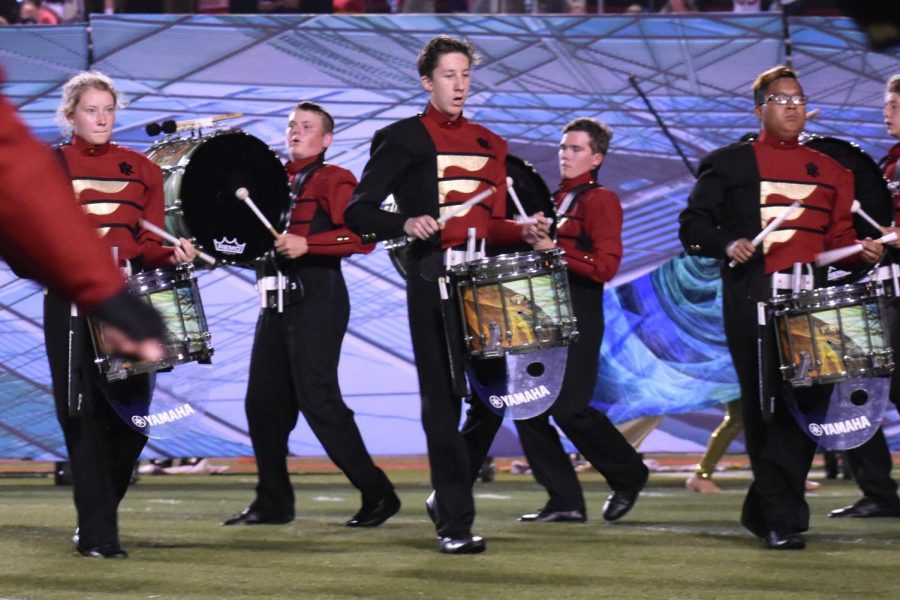 The Pride of Rock Island performs their show, “To Find My Soul” at the Homecoming Game.

“And into the forest I go, to lose my mind and find my soul,” Head Director of Rock Island Bands Pete Carlin repeats the words of the famous author and environmentalist, John Muir. When deciding on a theme for the 2019 marching band show, Carlin was influenced by Muir’s appreciation for nature. From the quote above, Carlin created the program entitled, “To Find My Soul”, centered around the idea of leaving cityscapes and the stresses of daily life behind to discover your true self in nature.

This year is Carlin’s eighteenth as head director at Rock Island. However, several aspects are different this season. First, a few new staff members have been hired to write and produce the show. A new color guard writer, drill writer, and visual designer have been introduced, all from high ranking drum corps, which are essentially professional marching bands. The previous writers worked with mostly high school bands, so hiring staff who work with drum corps will hopefully give the band a better produced show. “The show is more put together,” Carlin explained about the impact of the new staff. The concept and execution of the show have been more organized due to the new writers.

Along with the added staff, the band’s uniforms and props will be different this year. The traditional uniforms will be worn, as opposed to creating custom jackets, similar to those used for the 2018 season. However, hats (called shakos by the band) will be new, a style close to those worn for The Collective. The shakos will be taken off during 2nd movement this year, which is something the band has never done before. The color guard uniforms will be green and gold, matching the show’s props. Silver trees made by band parents and volunteers will be collected on the left side of the field, forming a forest that will be the focal point of the props. Large backdrops will sit on the back right of the field, first with cityscape images that will later be switched to a depiction of a wood nymph, surrounded by golden fields. The front of the field will have smaller versions of the backdrops, called scrims, whose pattern will be golden to match the nymph. “The visuals are gorgeous,” Carlin commented. The props and images will serve to tie the concept of the show together, as well as making it easier for the audience to pick up on.

The alterations are not only Carlin approved, but also enjoyed by students. Ryan Nickel and Miranda Clark have positive opinions of the new changes made. “I like it a lot,” Nickel said. In addition to being a senior mellophone player, Nickel is also the brass captain of the band. “It seems cool. It reminds me of The Lion King, but with more oooh!” First year marcher Clark humorously responded her thoughts on the show. She is a freshman in the flute section this year. “I feel like we’ve had a head start this year,” Nickel explained on the differences this year from his first three shows. As a result of the new drill writer, the band received and were able to prepare more of their show earlier than past years. They were able to learn more of their show during summer band camp, as well as receive the majority of the music during the previous school year.

“It’s been pretty good, and everyone is really nice,” Clark described her experience in band, so far. “I’m looking forward to being the best we can and going out with a bang,” Nickel remarked about what he looks forward this year. The band’s goal for this year is to make finals at the Illinois State competition again, and maybe even to win 1st in their class at State. With the addition of new, improved writers, they have a good chance of achieving their goals. “I look forward to staying in band and getting a lot better,” Clark said of what she hopes to accomplish in her next 3 years in band.

Overall, band members and staff alike are looking forward to the 2019 season. “The reactions have been all positive. I’m really looking forward to seeing the finished product. I enjoy seeing all the kids buy into the ideas,” Carlin said. Students like Ryan and Miranda also anticipate the final version of the show and find joy in bringing the concept to life. “

With this show, I aim to teach simplicity, and I encourage everyone to find out who they are and what fulfills their souls”

,” explained Carlin. The band as a whole looks forward to kicking their season off and finding their souls.
Leave a Comment