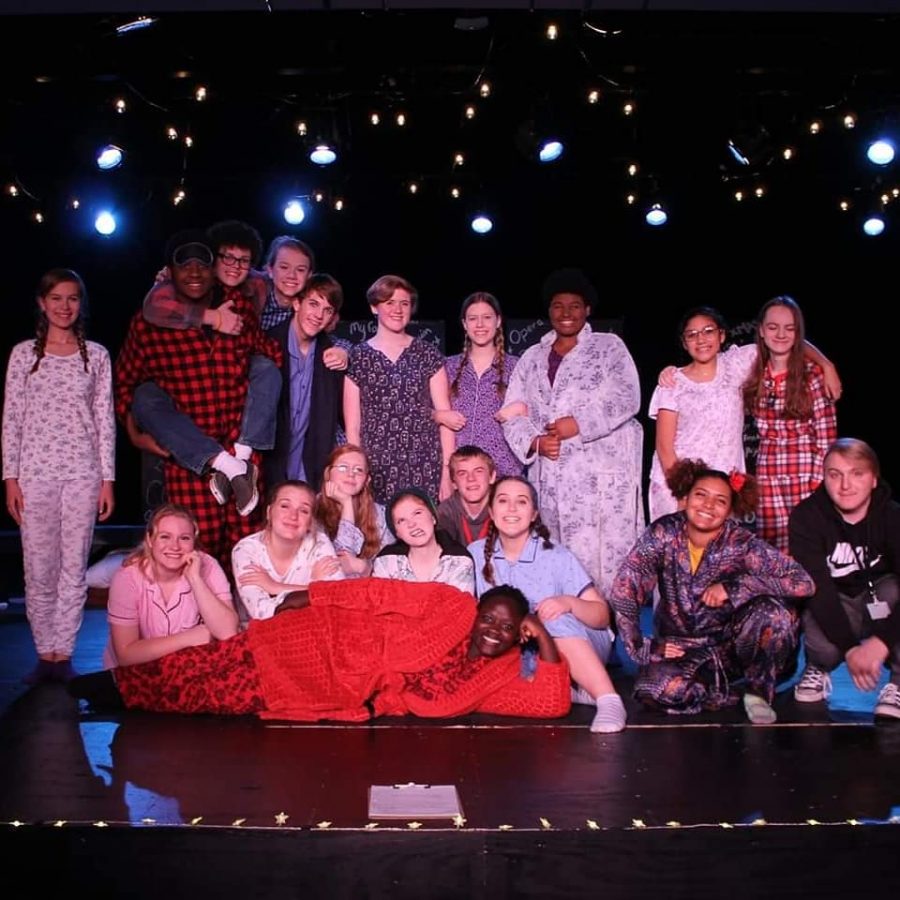 This weekend, the Rock Island Theatre Department put on the show Peter/Wendy, directed by Dorian Foster. Countless hours of hard work and dedication from the cast and crew certainly paid off. The curtain may have closed on Saturday night, but the show will live on in people’s memories.

Peter/Wendy has been a different experience for both the audience and the cast than any shows from the past. For this show, the actors were forced into the mindset of a child. Instead of a neatly painted set, the audience faced a blank stage, and near the back of the stage were four black walls, painted with “happy thoughts” by the cast. Instead of using beautiful effects to create the movement of water, the students used a blue sheet and waved it to create a different illusion to water.

Students new to Drama Department found a home here, on the Little Theatre stage. Kassandra Miller states that “being a freshman was really nerve wracking, but I am really happy that everyone has been so accepting of me.” Miller has experience acting in plays, as she started out doing theatre at Edison Junior High. High School, however, is much more intense than Junior High in many ways. As Kassandra states, “This show has been different than the shows I have been in throughout Junior High. The cast did a lot more planning, acting, and we all helped each other more. Overall, it was a lot more fun.”

Charlotte Boyer, who is a “veteran” in the Drama Department (or a returning actor), also commented on how this show is different than any other show she has acted in. “The play required more imagination and creative input. Instead of using a lot of specific props for the play, we had to come up with other ways to make the play come to life,” Boyer says. This actress was featured as a supporting lead in the Fall Play last year, and she has created such a love for the Theatre Department that she just had to come back! Boyer concludes, “My favorite part about being a part of the Drama Program is that everyone treats you like family, and everyone wants each other to be better and to succeed.”

Peter/Wendy made a child’s imagination a reality with fun props, like Captain Hook’s hand which was covered in tinfoil to recreate his hook. As Boyer pointed out, the cast was forced out of their boxes and into a new world of acting. Instead of buying a hook from a Halloween store, the actors had to imagine items a child would use to create this look. Costumes were not what made up the characters in this show, how a person portrayed their acting was the only evidence towards character. Once again, they were required to think outside of the box, asking themselves ways to expose their character, such as Tinker Bell carrying a bag of jingle bells around with her.

Miller concludes, “I may not have been here that long, but the time spent doing this show with such creative people has been amazing.” Peter/Wendy has been more than just a play, it has brought together friends to create an amazing show, which left the audience to wonder why Dorian Foster and her cast decided to produce the show the way they did. Perhaps they will never find out, but those who can return to their childhood imagination just might.