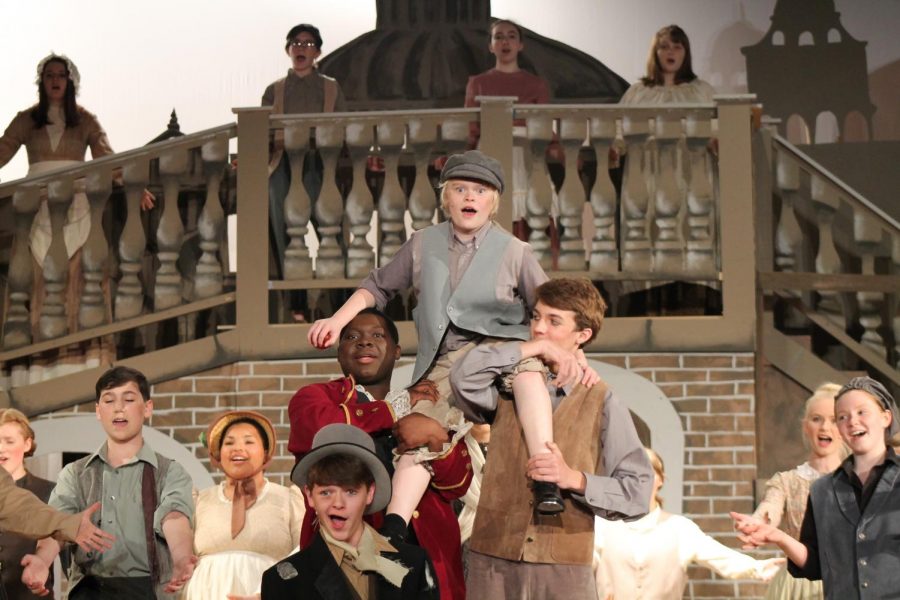 Freshman Julian Anderson was cast as Oliver during his 8th grade year.

The Rock Island High School Theatre Department performed Oliver! as their 2019 Spring Musical.  Based on the novel Oliver Twist by Charles Dickens, the musical was first released in 1968, and has since become a classic.  The main character, Oliver, is a young orphan, who escapes from a cruel workhouse, only to be picked up by a gang of boys, who make a living by picking pockets.  Along the way, he meets many eccentric characters, and is caught up in the large struggle of good versus evil.

Mrs. Foster, the director and producer, said that she chose Oliver! as the musical because the show is “challenging in a lot of good ways.”  The set was one difficult factor, as various different settings are reflected throughout the show, including the orphanage, the streets of London, and the gang’s hideout.  Foster noted that her favorite part of directing the show was that, “It is a dark story, and not typical of our show selections.” The play deals with many dark elements like orphans, death, child-labor, crime, and social injustice.

Montana Hogan, now a senior, played Nancy in the musical when she was a junior.  She stated, “This musical was more serious than any musical we have done in the past. It was a long process to try and portray the sad themes of the show, but our cast, crew, and pit presented it wonderfully once the curtains opened on Opening Night.”

One unique aspect of this show was that junior high students performed on stage along with actors from the high school.  Julian Anderson, who portrayed the main character Oliver, was in eighth grade when he debuted this role. Anderson said that his favorite part of performing the show was “entertaining the audience.”  The early introduction to high school theatre is a good opportunity for students who plan to continue drama after junior high.

Hogan noted her favorite part of performing in this show was, “All of the people I met and the friends I made! ”  In addition to the lead role being a junior high student, the majority of the gang was made up of younger members, as well.

Anderson described his musical experience as, “Awesome!”  and stated that he “was nothing but excited every day to get to perform with all of the people involved with the show.”

This production of Oliver! showcased the talents of high school and junior high actors from Rock Island.  The theater program is excited to see how the younger generation will influence the drama department at Rocky as they continue their acting careers.